The electric scooter craze shows no sign of abating, with online searches increasing by 147%* in the six months to June 2022.

With government backed e-scooter rental trials going on in more than 30 cities around the UK, and a new rental scheme now happening in 10 London boroughs, the Transport Committee is calling on e-scooters to be legalised.

Despite the call for legalisation and increase in trials, GoCompare Bike Insurance is warning people to be aware of the rules and regulations around privately-owned electric scooters before they hit the roads or pavements.

Electric scooters are classed as motor vehicles under the Road Traffic Act 1988 and are subject to the same rules as other motorised vehicles. However, as they cannot be insured for use on public roads, cycle paths and pavements, use of electric scooters on these roads remains illegal and drivers face a £300 fine and six points on their licence, if caught.

To drive a rental electric scooter, you have to be at least 16 years old, have the correct driving licence - at least a category Q – where you are allowed to drive two and three-wheeled vehicles without pedals if the engine size is no more than 50cc and the maximum speed doesn’t exceed 15.5mph. Insurance for rental e-scooters will be provided by the rental operator and you can ride them in cycle lanes or on roads, but not on pavements.

Ryan Fulthorpe, of GoCompare Car Insurance said: “The popularity of the electric scooter is not going away and despite the increase in rental schemes around the UK and in London, there are many people still using them on public roads, cycle paths and pavements who may be totally unaware that they are breaking the law.

“The lack of ability to properly insure and licence these e-scooters means that they are illegal if not driven on a private road, and so anyone caught driving on a public road and or pavement who has a licence can be fined and given up to six points on their licence.

“The consequences for drivers if caught isn’t just the fine and points, and the possible seizure of their scooter, but also the knock-on effect for car, motorbike and van insurance premiums, as any points on a drivers’ licence will lead to higher insurance costs. So, think carefully before jumping on that e-scooter to pop to the shops,” Ryan added.

Some home insurance policies might cover an electric scooter against theft, but again that would be dependent on the cover details of your home insurance policy so check them carefully as some might exclude cover for motorised contents or include other caveats. There are also specialist insurers that offer public liability and personal accident cover for use on private land, but this cover would not extend if the e-scooter driver drove on public roads or pavements.

For information on how points on your licence can affect your car insurance visit: https://www.gocompare.com/car-insurance/guide/how-driving-convictions-impact-car-insurance/

*According to a Google trends search of electric scooters on June 22nd. 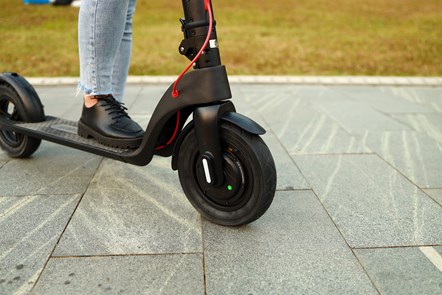