Eco-friendly and simple with plenty of storage: the UK’s ideal home revealed

Eco-friendly and simple with plenty of storage: the UK’s ideal home revealed

With two fifths of us (43%) coveting a custom-build house* new research from GoCompare Mortgages has revealed what features make up the UK’s ideal home. Working with an architect from eye-kon, a visual creation studio, GoCompare has designed and built a CGI version of the perfect property:

According to the survey of 2,005 UK residents**, people favour a two-storey, ‘eco-minimalist’ (simply designed and sustainable), detached home complete with three bedrooms and a modest, medium-sized garden***.

Most people would place their ideal home in a village, while small town and suburb locations also proved popular.

However, Londoners thought otherwise, with 70% saying they’d need to live at least within commuting distance of a big city.

While a modern, eco-minimalist architecture was favoured by 28% of UK adults, they took a more traditional route when picking their interiors. More than half selected either a traditional or a country house style for the inside of their ideal home.

Bucking the trend again, a quarter (25%) of Londoners opted for a minimalist style while nearly one in five (19%) Northern Ireland residents chose a period interior.

When it came to selecting additional rooms, the three most sought-after spaces were:

On average, 60% of people would include solar panels on their ideal home, with people from Wales (70%), the South West (68%) and the North West (63%) the most likely to use them. Large proportions of respondents also said they’d include rainwater harvesting features (51%) and eco-friendly lighting (46%).

Overall, people favoured a fuss-free garden, with many people opting for simplicity. Yorkshire and the Humber proved the biggest nature lovers with 27% of respondents from the area saying they’d want a wildlife-friendly garden, closely followed by the North East (24%), and Scotland (23%).

Outdoor accessories also proved popular, with 63% of respondents opting to include a shed. Water features and ponds were the next most popular outdoor additions, with 35% and 25% of people voting in their favour respectively

Matt Sanders, spokesperson for GoCompare Mortages said: “Having the chance to design or build our own home sounds like something we’d all jump at given the chance, and aspiring to own your own home is ingrained in our cultural DNA. We’re encouraged to get on the property ladder as soon as possible with renting often chastised for being ‘dead money’.

“From both an investment and a borrowing perspective it’ll always come down to resale value. Whatever you spend on building or improving your home should add value - and it only adds value if other buyers agree and are willing to part with their cash for your property.

“You should always talk about any unusual features as soon as possible with your advisor, who should be free and impartial, so they can make appropriate recommendations.”

If you’re interested in building your own home, GoCompare has created a handy visual guide that details the steps you need to take: http://www.gocompare.com/mortgages/build-your-own-house/

**On 20 July 2017, 4media Group conducted an online survey among 2,005 randomly selected UK adults (aged 18 and over). The margin of error-which measures sampling variability-is +/- 2.2%. The results have been statistically weighted according to the most current education, age, gender and regional data to ensure samples representative of the entire adult population of United Kingdom. Discrepancies in or between totals are due to rounding.

**** All of the above estimated valuations are based upon similar properties which have recently been on the market for sale within these areas. 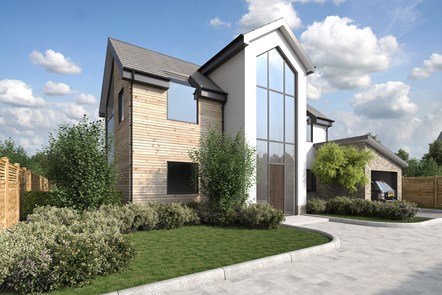