58% of young drivers using mobile phones behind the wheel

New research from GoCompare Car Insurance has revealed that 34% of drivers use their mobile phone illegally while in their car, with the figure rising to a shocking 58% of 18-24 year old drivers.

The research reveals that more drivers are tempted to use their phone while waiting in traffic, with the number of drivers using their phone behind the wheel reducing to 25% while actually moving.  However, the corresponding figure for 18-24 years olds hardly changes at all – dropping from 58% to 56%.

Nearly a fifth of motorists admitted to checking messages or emails on their phone when sat in a traffic queue, while 13% have used their mobile phone to change music or re-programme their sat-nav phone app.

Those aged 18 to 24 are nearly three times more likely to use their phone to change the music or to re-programme their sat-nav app while driving and nearly twice as likely to illegally make a call with a hand-held device.

Only 32% of the motorists surveyed put their phone out of reach while they are driving.

Driving laws have prohibited the use of hand-held mobile phones behind the wheel since 2003.  Harsher penalties for hand-held mobile phone use while driving were introduced in 2017 to deter motorists from the potentially deadly distraction. The law also applies to stationary vehicles.  The only time drivers are permitted to use a hand-held device is when they are safely parked, with their car’s engine turned off and the handbrake applied.

The law allows motorists to use a hands-free mobile phone while driving.  However, they can still be prosecuted if they are found not to be in proper control of their car or to have been distracted.

Samuel Nahk, spokesperson for Brake, the road safety charity, said, “Mobile phone use behind the wheel, in any form, is illegal and highly dangerous and those who do it are selfishly putting other road users’ lives at risk.†

“Anything that distracts a driver’s attention from the road, even for a split second, can lead to devastation.

“Using a phone behind the wheel should be as unacceptable as drink driving, with studies showing that reaction times whilst texting are double those of drink-drivers. This new research makes it clear that mobile phone use behind the wheel is all too prevalent and a crackdown is required to rid our roads of this menace.”

Matt Oliver, car insurance expert at GoCompare, said, “It’s over 15 years since driving while using a hand-held mobile first became illegal.  In that time, technology has developed rapidly and smartphones have become an invaluable part of most people’s lives – helping us to do everything from communicating, paying for goods and helping us find our way around.  And, as our research shows some people are so addicted to their phones they’re prepared to break the law.

“But, using a hand-held mobile phone is one of the most dangerous distractions for drivers.  It removes their attention from the road ahead, slows down reaction times and driving one handed can result in the driver not being fully in control of the vehicle - any of which could have potentially fatal consequences for themselves or other road users.”

Matt Oliver continued, “To stay safe and on the right side of the law, drivers wanting to use their phone while driving need to make sure that it’s hands-free.  Devices should be fully set-up before they start driving.  For example, a smartphone used for navigation should be in a cradle fixed to the car’s dashboard or windscreen in clear view, without obstructing the driver’s view of the road, with the destination programmed before setting off - so the phone does not need to be handled during the journey.  Drivers should also remember that they can’t use their smartphone to pay for items while driving – for instance when buying fast food from a drive through takeaway.

“In addition to the legal penalties and safety issues for hand-held mobile phone use while driving, motorists convicted of motoring offences will face higher insurance premiums.”

For more information on driver distractions, including the video and info graphic, visit: https://www.gocompare.com/motoring/texting-while-driving/ 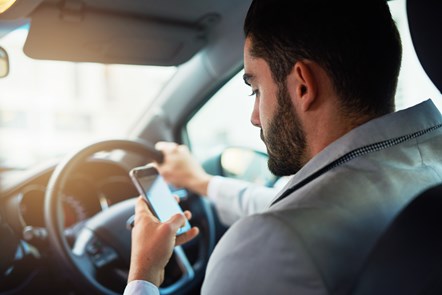